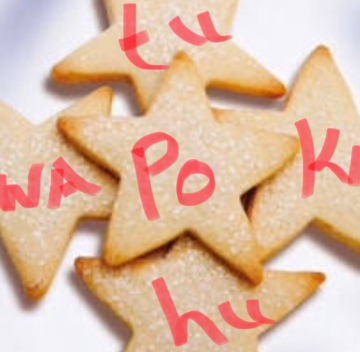 The tiny pohutukawa on our deck is flowering for the first time and I am feeling a sort-of pre-emptive heartbreak about the advance of myrtle rust. What would Auckland and the north be like without pohutukawa?
We have five medium sized on the bank behind our bach and the neighbour there has some very fine ones holding up the cliff edge. In summer the decks are covered in red stamens – and they block the gutters horribly but I don’t care.
When Roger S was editing my collection Conversation by Owl-light he said I had used ‘pohutukawa’ too many times, so I obediently changed to metrosideros or to pururi or changed the line entirely – but I honestly don’t think you can have too many pohutukawa, in a book on a bank or on a deck even.
One year in the past when our book club was still doing Xmas presents I wrote a Xmas haiku about pohutukawa – the haiku itself was not brilliant – but I made 17 star-shaped spice biscuits
And on each one iced a syllable ( 5 biscuits for pohutukawa!). The trick was – for the ‘giftee’ ( can that really be a word?) to sort the biscuits into correct haiku order. Great fun. Well I was laughing anyway. Can’t find the poem anywhere in my notes but here’s the recipe. I used to make a batch every Christmas for years, when I was young and virtuous. The recipe was from Elisabeth the Hungarian- I used to teach with her back in the olden days

This is a text widget. The Text Widget allows you to add text or HTML to your sidebar. You can use a text widget to display text, links, images, HTML, or a combination of these. Edit them in the Widget section of the Customizer.
%d bloggers like this: